My wife and I will never agree on whether chicken belongs on pizza (I say no!), but this is my one exception. The first time I had Thai red chili sauce on pizza was at a pizza and BBQ place in Provo, Utah. Unfortunately, it’s not around anymore, but the idea stuck with me. I eventually made it for my wife and it instantly became our favorite pizza. My “beef” with chicken pizza is that chicken has almost no flavor, and most restaurants do little to season the chicken other than adding some salt & pepper…maybe. With this recipe, I’ve tried to incorporate some of the flavors I remember from my trip to Thailand into the chicken – the salty Fish sauce, the sweet nut flavoring, and the sour lime. Feel free to experiment with the toppings & chicken flavorings. I don’t think I’ve made it the same way twice, and it always turns out great because the key is that combo of cheese, chili sauce, and chicken! 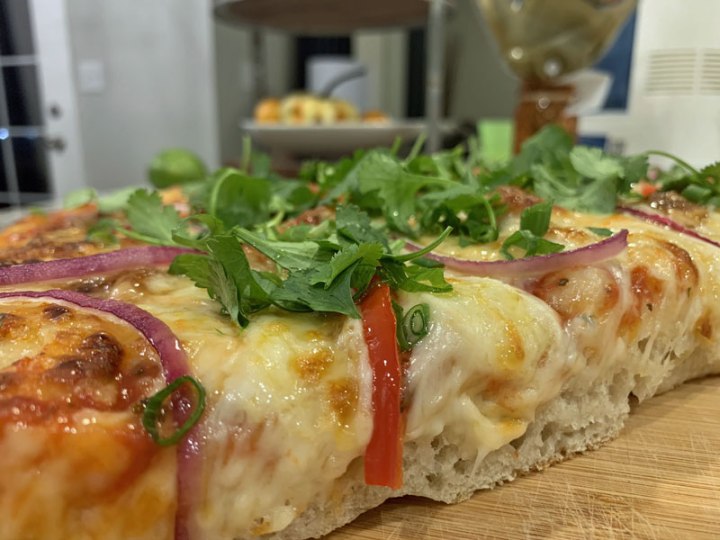 Combine the peanut butter, rice vinegar, and fish sauce (if you’re using it) in a small bowl and microwave 10 – 20 seconds so it can be easily mixed together. Add the fresh ginger. Set aside.

In a non-stick frying pan, cook the chicken and shallots over medium heat in the oil. When the chicken is browned and cooked through, stir in the peanut butter sauce. Heat through to thicken it a bit and then remove the chicken from the heat. Squeeze the lime over the chicken mix and stir. Set aside to cool.

Spread the Thai chili sauce on the pizza dough, as you would marinara sauce on a traditional pizza. Top with the chicken, mozzarella cheese, red onion, and red pepper. Bake according to the directions for the dough you’re using, likely at 450F for 15 or so minutes.

When the pizza is done, remove it from the oven. Sprinkle the green onions and cilantro on top and then squeeze on some lime juice. Enjoy!